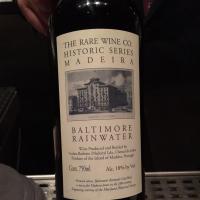 Rainwater took its name from its pale color and delicate texture and flavor. Yet, the origins of the style are shrouded in mystery. Some attributed it to a Savannah wine merchant after the Civil War, but that cannot be, as Rainwaters existed at least a half century earlier. Others said Rainwaters were a freak of nature. Noel Cossart credited his own firm with creating Rainwater in the 1700s, after a barrel of wine was left on a beach.

Rainwater Madeira reached the pinnacle of prestige in Baltimore. In 1902, that city’s greatest Madeira connoisseur, Douglas H. Thomas, called Rainwater the highest standard. And the absence of Rainwaters in a 1900 New York auction prompted one merchant to speculate that Baltimore connoisseurs thought so highly of them that they bought them all up and none reached New York.

Unfortunately, in the 20th century the name “Rainwater” became bastardized—used to label inexpensive Madeiras that were too sweet and too soft to have anything in common with the great Rainwaters of the past.

I have long wanted to remind America of Rainwater’s pedigree by making a classic example. And from contemporary descriptions, I had a fairly good idea of what it should taste like. But I hoped to find an actual model for my wine. I finally found it in 2008, when I purchased a few bottles of a very rare Rainwater imported into New York City by Robert Benson in the 1820s. Because the wine was put into glass soon after its arrival in the U.S., its taste was essentially frozen in time, giving us a very good idea of what Rainwaters tasted like in the 19th century. I shared samples of this wine with Barbeito winemaker Ricardo Freitas and asked him to model our Baltimore Rainwater on it.

Ricardo started with a base wine that was 80% Verdelho, made up of two lots ranging in age from 8 to 13 years. Young Verdelho was a perfect starting point, not only because of its delicacy and minimal sweetness, but because Verdelho would have been the most common component in the early Rainwaters.

For a greater sense of age and also a bit more body, but without increasing the wine’s sweetness, Ricardo added two different lots of old Tinta Negra Mole. Prior to entering the Baltimore Rainwater blend, each of the components was aged (like all of our wines) by the time-honored Canteiro method.

Baltimore Rainwater is very possibly the first Madeira made along the lines of a classic, 19th century Rainwater in at least a half century. Hopefully it will mark a return to Rainwater as it should be: a Madeira of ethereal body, great finesse, delicate flavors and just a touch of sweetness.