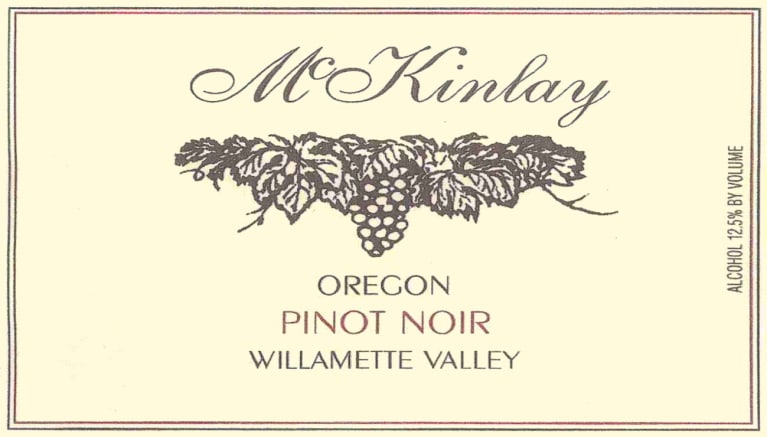 McKinlay Vineyards Newberg, Willamette Valley, Oregon USA The Kinne family have been well-established in Oregon’s Willamette Valley since the early 1900s. George Angus McKinlay, a minister, dry-farmed cherries, apples, prunes and nuts on well drained volcanic soils on east facing slopes in the Valley’s Eola Hills. Rain in winter was welcome, while spring frost was the greatest hazard. Long summers, abundant with sunshine made the region’s farmland extremely valuable and its produce famous throughout the West. Now, the original farm is part of a 4-H camp, but McKinlay’s great-grandson continues the family’s agricultural heritage on the southeast-facing slopes of Parett Mountain in the Chehalem Range, 20 miles southwest of Portland. The winery, founded in 1987 and named for the family’s patriarch, originally sourced its Pinot Noir from the old Eola Hills location, a site deemed ideal, due to its soils, elevation and exposure. A new farm was founded on 32 acres in 1989, near Newberg OR; vines for the new estate were planted in 1990. Early vintages included Pinot Gris and Chardonnay, however, since 1995, Kinne has devoted 100% of his energy to Pinot Noir. The Estate vineyard provides 50% of the fruit, while the rest is sourced from three of the family’s other vineyards, all within the Chehalem Mountain range. These other vineyards, La Cantera, Marquis and Tommy T are farmed following a philosophy of producing the healthiest of vines by working completely hands-on. Kinne aims for low yields to produce greatest depth and concentration of flavor. He trains his vines in a typically Burgundian manner, allowing only 1 cluster to ripen on each shoot. Vines grow upwards and he orients both fruit and leaves to maximize air flow and ease the pressure caused by rot, a common affliction to the region’s grape vines. His belief that Pinot is particularly noble due to its ability to express itself in such a confident and understated form is tangible in his wines. Inspired by the beauty and elegance of France’s greatest Burgundies, his wines are pale, not opaque, fragrant, rich and bright underlining its length and complexity. His methods in the winery are nonintrusive, pointedly placing the quality of the vine’s fruit to the forefront. Kinne allows the area’s native yeasts to ferment the wines, uses no enzymes; he blends from the various lots with profound sensitivity to the wine’s aromas, flavors texture and longevity. He matures the final product in no more than 25% new oak. The wine is neither fined nor filtered at bottling.

Vintage Bordeaux Wine Tasting back to 1937

“Wine was born, not invented … like an old friend, it continues to surprise us in new and unexpe...

Vintage Burgundy tasting back to 1928

“Excellent wine generates enthusiasm. And whatever you do with enthusiasm is generally successful. Baron Phi...