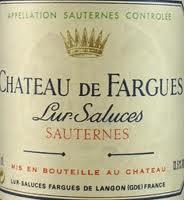 (96 Points) After a scorching summer, the 1990 de Fargues harvest began early (on September 18) and the fruit was picked over 4 tries until October 10 – the earliest harvest on record. It is the most powerful of the trilogy. Delivering 130 grams-per-liter residual sugar at 13.6% alcohol, it has a prodigious bouquet of over-ripe oranges, toffee apple, chlorophyll and even a faint hint of chocolate. The palate is medium-bodied with a luscious ripe mandarin and apricot-tinged entry, building wonderfully to a botrytis-laden finish that fans out like a firework, leaving traces of cumin and dried orange peel on the long finish. The ’90 de Fargues is simply superb in every way, a multi-faceted wonder. Tasted April 2013. - Neal Martin  Robert Parker's Wine Advocate - Robert Parker's Wine Advocate, June 2013

"To make a great wine one needs a madman to grow the vine, a wise man to watch over it, a lucid poet ...