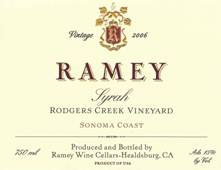 2016 began with another very early bloom, leading to a very early harvest in Sonoma County; our first fruit arrived August 5. During maturation, summer temperatures were warm and steady, with fewer heat spikes than 2015. Three weeks of cool weather in August and September relaxed the pace of harvest, allowing for methodical picking decisions and perfectly developed fruit. Yields were relatively average – down from 2014 and up from 2015.

fermented in tank as 75% destemmed fruit with 25% whole Syrah clusters. We utilized native-yeast and malolactic fermentations. The wine rested sur lies for 12 months in 41% new French barrels from François Frères, Demptos and Taransaud Beaune. Our 2016 Sonoma Coast Syrah was bottled without filtration in June, 2018.


Winemaker Notes: Our Syrahs are grown in the cool climate of the Sonoma Coast which offers a style reminiscent of the Northern Rhone regions of Hermitage and Cornas:  aromas and flavors of smoked meat, white pepper, green olive and grapefruit, coupled with a silky texture and savory flavor.

Wine Bar is Closed for a Private Event - Charles Cabernet