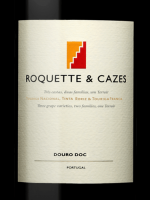 Roquette e Cazes, the latest product of the happy encounter of two families.  Jorge Roquette (Quinta do Crasto, Douro)and Jean-Michel Cazes (Chateau Lynch-Bages) were already united by a firm bond of friendship before going into partnership to create great wines using grape varieties native to the Douro valley.  The latest fruit of this collaboration, “Roquette e Cazes” came into being with the 2006 vintage, and has benefitted since its launch from the expertise acquired with Xisto (see below). Its keeping potential differentiates it from its older sibling. More accessible, it is in fact ready to taste as soon as it is put on the market.


Xisto benefits from a specific fermentation management, that is, through Bordeaux-style vinification protocols adapted to the potential of the grape varieties used. The fermentations are carried out at higher temperatures than those used in Portuguese vinification.  Likewise, speeding up the pumping over during the first three days of fermentation and a longer maceration time give the wine its exceptional concentration.  With its production limited to between 3,000 and 4,000 bottles per year, Xisto is a rare wine. At Vinexpo 2005, Xisto 2003 was voted “Exhibition Discovery” by an international panel of 14 specialised and eminent journalists, wine tasters and sommeliers.