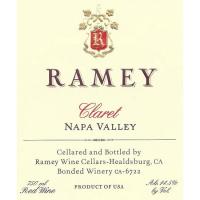 2016 began with another very early bloom, which lead to a very early harvest ; our first fruit arrived August 5. During maturation, summer temperatures were warm and steady, with fewer heat spikes than 2015. Three weeks of cool weather in August and September relaxed the pace of harvest, allowing for methodical picking decisions and perfectly developed fruit. Yields were relatively average – down from 2014 and up from 2015.


Our Claret follows the Bordelaise model of blending different Bordeaux varietals. Malolactic fermentation is completed in barrel, and the blend is assembled early so it is “elevated” as the finished wine. Our 2016 Claret rested on its lees twelve months in French & American oak barrels, only 13% new, with monthly bâtonnage to coat the tannins, producing a luscious, cushioned mouthfeel.  This wine was lightly fined with egg whites and bottled without filtration in February 2018.


This soft, easy-drinking Cabernet is a good introduction to the vintage, and while it will improve over the course of three to eight years, it is not a wine intended for long-term cellaring.