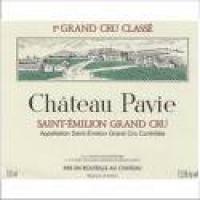 (98 Points) This 92-acre vineyard, which enjoys an impeccable southern orientation, is composed of limestone on the upper slopes, clay and limestone in the middle, and sand and clay at the base. Proprietor Gerard Perse, who has done a brilliant job since acquiring the estate in 1998, continues to push the envelope of quality to higher and higher heights. Planted with 70% Merlot, 20% Cabernet Franc, and 10% Cabernet Sauvignon, the grapes receive kid glove treatment with hand-harvesting into small plastic lugs, two triage tables, and aging for 28 months in 100% new oak that is purchased in advance, then air-dried and coopered according to Perseâ€™s specifications. In short, the man is a perfectionist, and the quality of all the estates he owns has soared dramatically.

The 2003 Pavie (7,080 cases; 13.5% alcohol) is closest in style to the 2000, but slightly more evolved and exotic. Its dense plum/purple color is accompanied by an extraordinary perfume of charcoal, creme de cassis, melted licorice, espresso roast, and blackberries. The wine, which hits the palate with a dramatic minerality, comes across like a hypothetical blend of limestone liqueur intermixed with black and red fruits. With massive depth, richness, and body, this tannic 2003 should be forgotten for 4-5 years, then enjoyed over the next four decades. The integration of acidity, tannin, and wood is flawless, and the wine is incredibly pure, rich, and intense.

Wine Closed for a Private Event

Closed due to private event

Closed due to private event- Palladino

Wine Bar is Closed for a private event

Wine Bar is Closed for a private event -ZN

Wine Bar is closed for A Private Event

Wine Bar is closed for A Private Event- M Walter