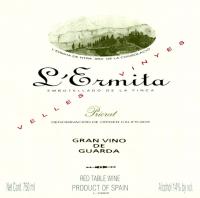 (96 points) The flagship, the 2008 Lâ€™Ermita, comes from a remarkably steep 4.4 acre, 70-year-old vineyard planted to 100% Garnacha and is aged in 100% new oak. It delivers a profound perfume of exotic spices, kinky wild berry aromas, incense, liquid minerality, black raspberry, and black cherry. In this vintage it is relatively forward with considerable elegance, a sophisticated personality, great depth and balance, and a pure, fruit-filled finish. It is one of the benchmark wines of the DO. Alvaro Palacios established his namesake winery in 1989. The flagship Lâ€™Ermita made its debut in 1993. Finca Dofi and Lâ€™Ermita vineyards are farmed biodynamically. All of the wines are bottled without filtration. In 2008 Palacios was the last grower in Priorat to harvest, waiting out rains that diluted other growersâ€™ fruit. It appears that 2009 was a slightly more successful vintage for Alvaro Palacios (and most Priorat producers) than was 2008. All of the 2009s were tasted from barrel samples at the Bodega in January 2011. Wine Advocate #194 May 2011