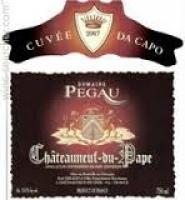 For the fourth time, the Chateauneuf du Pape Cuvee da Capo has been produced, and for the fourth time, it has received a perfect score although I might back off the 2000's perfect score based on the fact that it seems to be more of an upper-ninety point wine than pure perfection these days. The 2007 may come closest in style to the 1998, the debut vintage, although the tannins are sweeter and the wine is perhaps fatter and richer in the mouth... An inky/purple color is followed by aromas of smoked meats, Peking duck, licorice, lavender, aged beef, grilled steak blood, black currants, plums, sauteed cepes and soy. Enormously concentrated, broad, expansive and massive but not over the top, this is a tour de force in winemaking that is impossible to imagine unless one has a bottle to work through over the course of 4 to 5 hours. Although they advertise using all 13 authorized varietals, this wine is over 90% Grenache, largely from the famed La Crau section of Chateauneuf du Pape. They do have other vineyards from which they pull some of the fruit that goes into the Cuvee da Capo, including St.-Jean, Esquilons and occasionally Monpertuis. The 2007 seems to be broader, fatter, more unctuously textured and more flattering to drink at this stage than the 1998 was. In that sense, the evolutionary development may resemble their 2003s. The 2007 was bottled in February, 2010, and my anticipated drinking dates are 2014-2030+. (RP)