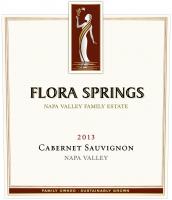 The grapes for our 2013 Napa Valley Cabernet Sauvignon were grown in some of Napa Valley's most prestigious appellations, including the mid-valley regions of Rutherford and Oakville. As in previous vintages, we pressed off a portion of the hand-picked grapes early to minimize skin contact and retain the bright fruit forward character of the fruit. The balance was left on the skins for an extended period of time to extract soft tannins, rounding out the mid-palate and creating a lovely long finish. The wine aged in a combination of small French and American barrels -- 35% new -- for eighteen months.  In 2013 we chose to blend in small portions of Merlot (7%), Malbec (3%) and Petit Verdot (2%) to add complexity, color and deep flavor to the finished wine.

Opaque and densely purple, this is a rich, beautifully extracted Cabernet Sauvignon offering an opulent nose of blackberries, crème de cassis and roasted espresso beans. The palate unfolds with a lush core of black fruit and black licorice accompanied by warm, spicy notes of clove, sandalwood and a hint of cedar. Supple tannins frame the full-bodied mouthfeel of this classic Napa Cab, which leaves a lasting impression of fruit and spice.

Though 2012 was a stellar vintage, 2013 may have been even better. In Napa Valley a warm, dry spring brought early bud break and created ideal conditions for flowering and fruit set. With the exception of one heat spike, temperatures in June and July were consistently in the zone for optimal vine activity, resulting in notably healthy vines as fruit went through veraison and ripening. Harvest was early, and when it came to a close it was about two weeks earlier than other Napa Valley harvests of the last decade.

"Drinking wine is just a part of life, like eating food." - Francis Ford Coppola And we have to drink ...

Bad news isn't wine. It doesn't improve with age. Colin Powell Whenever I get a great ...

Water Separates the people of the world.  Wine unites them. That’s why we drink a lot of wine!&nbs...

“There is truth in wine, but you never see it listed in the ingredients on the label” ― Jo...

What is better than to sit at the end of a day and drink wine with friends, or substitute for friends.  -Ja...