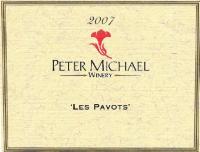 (96 points) The 2009 Les Pavots is absolutely fabulous. Mocha, espresso, spices, plums and blackberries are just some of the many notes that jump from the glass in this seamless, striking wine. The 2009 boasts exceptional textural finesse and tremendous class. In 2009 Les Pavots includes 22% Cabernet Franc, one of the highest percentages ever. It all works beautifully. The 2009 is firing on all cylinders. All of the vineyards in Les Pavots are now over 20 years old. In 2009 the blend is 66% Cabernet Sauvignon, 22% Cabernet Franc, 10% Merlot and 2% Petit Verdot. Anticipated maturity: 2016-2024. I tasted a large number of wines at Peter Michael. Overall, the 2009 reds made the most positive impression on this visit. The 2009 Chardonnays are very strong. I am less enamored with the 2010 Chardonnays, as they clearly show the ill-effects of a challenging growing season, which at Peter Michael yielded very concentrated whites with slightly higher than normal alcohol levels and an element of heaviness that is out of character. Winemaker Nick Morlet describes 2010 as a difficult year. Bud break was a full month late. High winds and rain during the flowering resulted in high amounts of shatter and yields that are dramatically lower than normal. Morlet describes 2009 as a vintage where everything ripened quickly and at the same time. This lineup includes several wines that are being released for the first time, including a trio of Pinot Noirs from estate-owned coastal vineyards planted in 2006 and 2007. It will be fascinating to see how those wines develop as the vines acquire age. The newest wine in the ever-expanding Peter Michael stable is a new Cabernet Sauvignon from the former Showket vineyard that will make its debut with the 2011 vintage and that will be called Le Chevalier. I hope to taste it soon. I tasted the 2010 Chardonnays and Pinots from barrel. Those wines were scheduled to be bottled in February 2012. The 2009 Chardonnays and Pinots were bottled in late January/early February 2011. Wine Advocate #199 Feb 2012

Pomerol and Pauillac- My two favorite Appellations in Bordeaux

“I would like a wine. The purpose of the wine is to get me drunk. A bad wine will get me a...

Wine, like food, is so emotional. If you think about it, so much of the courting ritual is surrounded by wine...

"Drinking is a very demanding profession and I can't hold down two jobs at once" Morgan Freid...

"To make a great wine one needs a madman to grow the vine, a wise man to watch over it, a lucid poet to make...

"It’s just booze - drink it!" Charles Smith   Every year we focus on the world&rs...