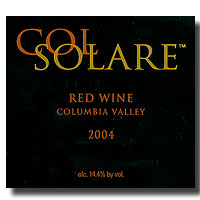 (93 Points) The 2007 Col Solare is a blend of 75% Cabernet Sauvignon, 20% Merlot, and 5% Cabernet Franc. The wine was aged in 85% French and 15% American oak, 100% new. Col Solare has planted a beautifully situated estate vineyard but the fruit is not quite ready to be included. Medium purple-colored, if offers up an inviting perfume of pain grille, pencil lead, espresso, violets, black currant, and blackberry. Structured and dense on the palate, the wine has superb intensity, volume, and balance. It will reward another 5-7 years of cellaring and will deliver prime drinking from 2016 to 2032.

Col Solare is a partnership between Tuscanyâ€™s Marchesi Antinori and Ste. Michelle Wine Estates which began in 1995. The 2007 crush was the second in Col Solareâ€™s splendid new winery in Benton City, one hour west of Walla Walla. Wine Advocate #190, Aug 2010

Burgundy makes you think of silly things, Bordeaux makes you talk of them and Champagne makes you do them. -- Jean...

"Drinking is a very demanding profession and I can't hold down two jobs at once" Morgan Freidma...

Vintage Bordeaux Wine Tasting back to 1937

“Wine was born, not invented … like an old friend, it continues to surprise us in new and unexpe...

Vintage Burgundy tasting back to 1928

“Excellent wine generates enthusiasm. And whatever you do with enthusiasm is generally successful. Baron Philippe d...