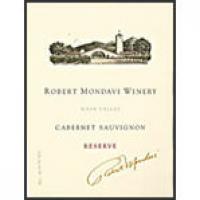 (98 points) I have drunk some memorable Reserve Cabernet Sauvignons from Robert Mondavi, including the gloriously fragrant, elegant 1971, the powerful, dense 1974, the seductive 1978, the mammothly-endowed, tannic blockbuster 1987, the silky, opulent, super-concentrated 1990, and the compellingly rich, layered 1991. However, if I were to select the Reserve Cabernet Sauvignon that may turn out to be the greatest Mondavi has yet made, the 1994 might edge out the 1991 and 1987. It may not appear to be the case, but I am often at a loss for words when it comes to writing about truly profound wines. They seem to have their own stature, presence, and character that transcend the significance of mere words. That being said, Mondavi's 1994 Cabernet Sauvignon Reserve is an exquisite wine, as well as a Cabernet that may turn out to be one of the wines of the vintage. The deep opaque purple color, and tightly wound nose and flavors still reveal enough profound aromas and flavors to mark this as one of Mondavi's most sensational efforts. The nose possesses a Margaux/Mouton-like cassis, lead pencil, floral aroma, backed-up by copious quantities of blackcurrant fruit. In the mouth, my notes said, "great stuff." The wine is full-bodied, layered, multi-dimensional, and astonishingly well-balanced, with an inner-depth and core of exceptional richness and intensity. All of this has been accomplished without any notion of obtrusive weight, tannin, or alcohol. The finish lasts for 35+ seconds. Because of its luxurious quantity of fruit, this wine will be accessible young, thus much of it will be drunk long before it ever reaches full maturity. However, for those able to buy more than a bottle or two, and who possess the discipline to wait 10-15 years, this wine should prove to be a formidable California Cabernet with a rare complexity, elegance, and richness. It should be at its best between 2002-2025. Readers can look forward to an immensely impressive group of Cabernet Sauvignons from Mondavi, which is not surprising given what this estate has produced over the last several decades. 1994 is unquestionably a great vintage for North Coast Cabernet Sauvignon. As the opening comments in this article have stated, 1994 stands above 1990, 1991, 1992, and 1993 - all outstanding vintages with no shortage of heroic performances. Remarkably, 1995 may turn out to be as profound as 1994, giving California its two greatest back to back vintages of Cabernet Sauvignon ... ever!