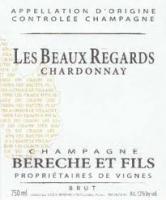 The Bereche estate owns vines in three different sectors of Champagne: the area around Ludes and Craon de Ludes; the eastern Montagne de Reims, around Trepail and Mareuil-le Port on the left bank of the Vallee de la Marne.  The young Raphale Berech as been working with his father Jean-Pierre at their nine-hectare estate since 2004 and since this time they have completely stopped using chemical herbicides and since 2007 they have been Biodynamic in a portion of the vineyard as well.  They have also begun to use cork for the secondary fermentation this is very good for the longevity of the wine giving it more complexity and character.

The Cuvee Les Beaux Regards is 100% Chardonnay from two different terroirs: two thirds of it comes from Ludes, while one-third is from vineyards around Mareuil-le-Port, in the Vallee de la Marne.