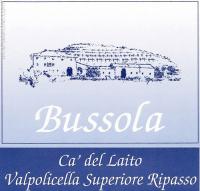 When Veneto legend Giuseppe Quintarelli was asked years ago to name the region’s next superstar, he didn’t hesitate: Tommaso Bussola.

Quintarelli’s prediction began to be realized in 1999, when Tommaso’s 1995s were released. Among the countless accolades he received, Gambero Rosso gave him the first of many Tre Bicchieris for his majestic Recioto TB.

Learning on the Job

Originally trained as a stone mason, Tommaso took over over his uncle’s Valpolicella estate—with its prized old vineyards in the heart of the Classico zone—in the mid-1980s. While vineyard work came naturally to him, he experimented relentlessly, and absorbed information and ideas from every source available. With each passing vintage, his wines came to show more polish, finesse, intensity, and personality.

By the late nineties, his style had matured, and his wines had become world-famous for their incredible intensity of fruit. Like other top Veneto winemakers, he uses new barrels, but any hint of new wood is hidden by cascades of lush, opulent fruit.

The key, we think, is not only the age of his vines but the fact that they are nearly all naturally low-yielding ancient clones: Corvinone (40%), Corvina Grossa (25%) and Rondinella (20%).

Corvinone, in particular, is quite rare today because of its low yields and finicky growing habits. Yet, Tommaso claims it is the Corvinone that gives his wines their depth. He calls it the “Super Corvina,” saying that it produces stronger, denser, richer, more perfumed wines.

Small percentages of old vine Cabernet Franc, Cabernet Sauvignon, Dindarella and Pindara round out the cépage, along with new experiments like Teroldego and Merlot.


Despite being the estate's standard wines, the Ca’ del Laito selections are near the summit of the Valpolicella pyramid. Only estate fruit is used, including declassified wine from top sites like Alto, Soto el Barbi, Casali and Ca’ del Laito.

Stay Tuned for this weeks menu!

Stay Tuned for this weeks menu!

Stay Tuned for this weeks menu!​