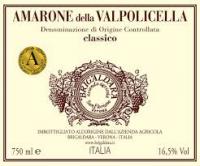 The name Brigaldara appeared for the first time in the deed archives in 1260 and referred to a group of farmhouses, the villa and the surrounding countryside.The Cesari family purchased the villa and the surrounding land in 1929. At that time, the area was used to cultivate grapes, olives, fruit and cereals. In the 1960s and 1970s, the land was converted to specialize in vines and olives.

In 1979 the winery began producing its own wine rather than selling fruit. The following years brought opportunity to expand landholdings both by purchase and rental. Stefano Cesari who formally founded the current winery in '79 has dedicated himself to becoming one of the most accomplished winemakers in the Veneto area. Tre Biccheri agrees that he has met that goal. His wife Maria is does the business end of things and young son Antonio is working on his masters degree while he oversees sales worldwide.

A Corvinone-dominant blend featuring Corvina and Rondinella, this is a sumptuous Amarone with a spicy, perfumed bouquet of black cherry and vanilla. The palate reveals a ripe core of bitter chocolate and spiced fruit cake, with complex flavours of Mirabelle plum and coffee. An attractive note of black tea persists through the finish. Alcohol, often a determining quality for Amarone-lovers, is nicely balanced by the wine’s density and velvety texture. It’s a powerful wine, yet elegant and graceful.