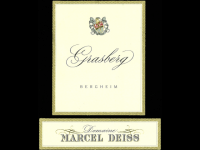 From inter alia Riesling, Pinot Gris, Gewurztraminer and Savagnin Rose in a high-altitude, austerely chalky, north-facing site, the Deiss 2007 Grasberg displays hauntingly floral aromas suggestive of rose, gentian, linden, and rowan, along with brown spices that migrate to a palate juicy with fresh apricot and yellow plum, and suffused with marine, sweet-savory, scallop-like mineral richness. Persistently wafting florals follow on a finish that offers a remarkable colloquy with mineral and pit fruit essences. I’m reminded a bit here of a really exotic vintage of Chablis Preuses (like 2006). This, I predict, is going to have exceptional, perhaps 20 year aging potential. I had chance to taste the late-harvested 2008 Grasberg must just as it was beginning to ferment, and the level of complexity and recognizable site character was uncanny.

Jean-Michel Deiss has been officially tasked with assisting his fellow Alsace growers in the drafting of new regional regulations and labeling conventions, in keeping with both France’s proposed move to a higher-order French appellation “d’Origine Protegee” and with the potential regional autonomy provided for (if inchoately) by recent EU legislation. As readers can imagine, Deiss’s vision involves a drastically diminished scope and roll for varietal bottling, analogous to his conception of Alsace crus as being best expressed by a blending of multiple cepages. (For more on the evolution of Deiss’s approach, consult my report in issue 175). Two things are indubitable: Alsace could use fresh approaches to labeling and marketing; and any Deiss proposal will have been thought-through all the way down to its historical and metaphysical levels. Deiss’s own line and labeling have been further simplified: beginning with 2006 his lower tier of wines is being bottled without village designations, leaving him more flexibility in blending. Although Deiss did not bottle a full compliment of his crus from the rot-challenged 2006 vintage, he said he was loath to pull back by settling his musts more aggressively of bottling earlier, “because the lees are the megaphone for the terroir.” Fair enough in principle, but the results were to say the least decidedly mixed, whereas Deiss’s 2007s represent a resounding success. (Deiss did not show me his lower-tier 2006s and I did not have chance to ferret any of them out from the marketplace.)  eRobertParker.com #188, Apr 2010