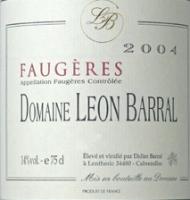 Didier Barral represents the thirteenth generation to grow grapes in the tiny hamlet of Lenthéric, within the confines of the Faugères appellation deep in the heart of the Languedoc. While his forebears made a living off of cultivating the vine, Didier took the family business to the next level when he began estate-bottling and commercializing his wines on a larger scale in 1993. Named for Didier's grandfather, Domaine Léon Barral is a beacon of revolutionary winegrowing: shortly after founding the domaine, Didier decided that biodynamic practices were the best choice for farming his thirty hectares of vineyards. He has pioneered numerous innovative agronomic techniques with the goal of establishing his vineyards as a self-sustaining ecosystem. This Renaissance man, naturalist, and biodynamic maven commands tremendous respect among his peers for his visionary approach to topics like soil management, pest control, and drought mitigation in his vineyards.

Incorporating biodynamic practices necessitates enormous investment and an uncompromising work ethic. With so much land to farm, it is fortunate that Didier has so much help. His workers of choice? A team of twenty cows, horses, and pigs that roam the vineyards during winter, grazing the cover crops while adding natural fertilizer to the soil. Without compacting the earth the way a tractor would, the animals effectively cultivate healthy microbial activity, bringing mushrooms, ants, ladybugs, earthworms, and other essential life forms, which add important nutrients while aerating the soil. This is the concept of sustainability at its finest, where the ecosystem thrives from the symbiotic relationships Didier has fostered amid the vines.

This approach ultimately translates to tremendously powerful, complex, and age-worthy wines inflected with an earthy mineral note from the schist soils of Faugères. Most of Didier’s vines get full southern sun exposure; in this Mediterranean climate where summer heat waves and drought are constant during the growing season, pruning in the gobelet style shelters the grapes from the blistering sun. Most of his vines are very old—some up to ninety years of age—keeping yields naturally low. Once in the cellar, Didier’s harvest is cared for with the same zeal, although he would consider the wine all but finished once it leaves the vineyard. This level of artisanship was once nearly extinct, had it not been for Didier and the profound influence he is having over other viticulteurs who now see how his work ethic and ideology translates to results.

"The secret of staying young is to live honestly, eat slowly, and lie about your age." ...

“Wine was born, not invented … like an old friend, it continues to surprise us in new and unexp...

“Excellent wine generates enthusiasm. And whatever you do with enthusiasm is generally successful. Baron Phi...

Wine Bar is Closed for a Private Event - HC

Wine Bar is Closed for a Private Event - ACG

I like best the wine drunk at the cost of others. Diogenes the Cynic   Truer...

Wine Bar is CLOSED for a Private Event

Wine Bar is CLOSED for a Private Event - RG