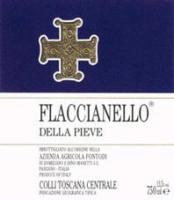 (95 points) The 1997 Flaccianello della Pieve wraps around the palate with endless layers of dark fruit. In 1997 the grapes were very small because the intense heat of the year dehydrated the fruit. Dark red berries, pomegranate, spices, smoke, licorice, anise and rose petals burst from the glass with notable energy, power and grace. Even with all of its intensity, the 1997 is beautifully balanced from start to finish. This racy, full-bodied Flaccianello can be enjoyed today or cellared for up to a decade. Anticipated maturity: 2012-2022.

This complete vertical of Fontodi's flagship 100% Sangiovese Flaccianello was yet another of the remarkable tastings of my recent trip to Tuscany. Flaccianello is an interesting wine because the quality level that is the norm today only really starts around 2001. Prior to that the wines were very good, and sometimes even better than that, but not profound. In 2001 proprietor Giovanni Manetti made the decision to focus on his estate's best fruit rather than making Flaccianello as a single-vineyard wine. Since then, Flaccianello has routinely been among the most exciting wines in Tuscany. Much of the fruit that now goes into Flaccianello comes from vineyards in the Pecille sub-zone of Panzano with a full southern exposure. Today Flaccianello is 100% Sangiovese, but the first vintages up to and including 1984 have 15% white grapes, as was common at the time. The early vintages up until 1990 spent about one year in French oak barrels, 50% new. In the mid-1990s Manetti increased the period of barrel aging to 18 months with the 1997, and then to 24 months with the 2006. Today the percentage of new barrels is close to 100%.

2. Since 2001 made from the estate's best fruit across a number of vineyards in Panzano's historic Conca d'Oro, prior to that a strict single-vineyard wine.

3. Flaccianello's status as an icon wine is cemented beginning in 2001

4. One of the more powerful of the 100% Sangioveses from Chianti Classico

“Wine is valued by its price, not its flavour.” Anthony Trollope   ...